full reviews »
Casino of The Month
This month our online casino of choice is:
Sloto'Cash Casino

Texas Hold'em is played with a standard 52-card deck and upto 10 players around a single table. A marker, known as the "Dealer" button, is used to indicate the position of the player who would be dealing the cards if the players were actually dealing the cards themselves. The player holding the button acts last and thus has a positional advantage throughout that hand. After each hand, the button is moved one position clockwise, so that all players in the game have exactly the same number of chances to hold positional advantage.

Holding the button is an advantage, because as the player to act last, you have more information available to you when it is your turn to bet. For exactly the same reasons, being forced to act first is a disadvantage. The players acting in the middle are, as you might imagine, somewhere in-between on the advantage/disadvantage scale; the later you act, the better your position. 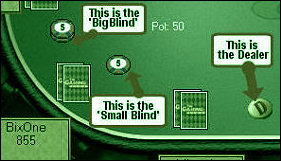 The two players on the button's immediate left must post "blind" bets...that is, amounts they place in the pot before they see their cards. Normally, the player in the very first position posts a blind bet one-half the size of the player in the second position, although in some games, the first bet (called the "small blind") may be as little as one-third or as much as two-thirds the size of the second bet (called the "big blind").

These blind bets are placed to ensure that for every round, there is at least some money to be played for. It also ensures at least one active player for each round, thus giving other players, someone to play against.

All participants are now dealt 2 cards face down. These cards belong exclusively to their "owners," and are not seen by the other players at any time until the showdown at the end of the hand. A round of betting takes place during this point, which is called "before the flop" or "pre-flop."

In the pre-flop betting round, the player in third position has only three choices. Because a blind wager has already been made, the player can do any of the following:

Fold. If the third player folds, he is out of the hand permanently, and cannot participate again until the next deal of the cards (when, because of the way the button moves around the board, he will be the big blind)
Call, by matching the size of the big blind; or
Raise. How much the player can raise depends on whether the game is limit, pot-limit, or no-limit. These variations are covered in subsequant sections. Please use the meun on the right to read more about them. For ease of discussion, we will assume the game played in our sample hand is limit poker, with $5 and $10 blinds, which means it is a "10-20 game."

The action continues in clockwise fashion around the table, with each player in turn having the option to call or raise. If the third or another player has raised, the player who acts after the raiser must now decide whether he wishes to call $20, or raise to $30. There is a limit on the number of raises per round; in some casinos, the limit is three raises, and in some, it is four raises.

With the pre-flop betting complete, the dealer now deals out three cards face-up. These are "community" cards that belong to everyone, and these three cards are called "the flop." To see how the community card feature works, if your "personal" cards are Queen-Jack, and the flop comes Q-5-4, you have a pair of Queens with a Jack "kicker"(secondary card). This isn't a bad position, unless someone else has a hand like King-Queen, in which case you both have a pair of Queens, but you are losing, because the other player has a better kicker.

A second round of betting follows.

Why this difference? On the first round, the blind money was placed in the pot to give the players a reason to play. If there were no blinds, there would be very little incentive for a player to enter a hand without the absolute best possible cards, because there would be nothing to win. As the first player in, you would be risking your $10 bet to win nothing; the only way you could win something would be if someone after you decided to call or raise your bet, and one would assume that the player after you, knowing that you had a strong hand (because you were the first to bet) would only raise or call with a strong hand himself).

The blinds thus give players something to shoot at, a reason to play with something less than the best hand. But once we reach the flop, there is already money in the pot, so there is no longer a need for blinds, and the first player can choose to bet $10, or to check.

It is possible, and indeed happens reasonably often, that all players still in the hand will check, meaning that there is no betting action on the flop. But if someone bets, the players must decide whether they are going to call or raise, and the same limit on the number of raises in a round applies.

After the third round betting concludes, the dealer reveals a fourth community card, known as "the Turn" or "Fourth Street." In limit poker, the size of the betting amount now doubles, to $20 (which is why this game is called a "10-20" game). The greater bet size aside, the process of betting and checking is identical to that on the flop.

After this third round of betting concludes, the dealer reveals the fifth and final community card, called "the River," or "Fifth Street." Betting is identical to the pattern used on the third (Turn) round.

At the end of this fourth round of betting, any players still remaining in the hand turn their cards over. (If at any point during the hand, one player makes a bet that all others decline to call, the hand is over immediately, and the player who made the final wager takes the pot without the need to show his cards.)

The player who can assemble the best five-card hand, out of the seven possible (the two in their hands and the five in the middle) wins the pot. The players can thus use two, one, or none of their "private" first two cards. Although it is unusual to use none of one's private cards, it is possible, if the five cards on the board form a strong hand such as a straight, flush, or full house.

If, for example, two players remained in the hand at the end, one of whose private cards were two kings (K-K), and one of whose private cards were two aces (A-A), and the board was 5-6-7-8-9, the players would split the pot, because each has exactly the same nine-high straight. Before the river card, the player with the two aces had a very large advantage, but the concluding nine cost him half the pot (as would have a concluding Four, which also would have put a straight on the board).

This month our online casino of choice is:
Sloto'Cash Casino