full reviews »
Casino of The Month
This month our online casino of choice is:
Jackpot Party

No-Limit involves blinds, just as does Limit, and in our No-Limit games you have a choice of $.10/$.25 and $.25/$.50 blinds. However, from here, limit and no-limit change dramatically.

The only difficult or confusing concept for players in No-Limit involve the MINIMUM size of raises that are allowed. The raise must always be at least the size of the previous bet or raise. So, for example, in a game with $5-$10 blinds, the first player into the pot could not bet a total of $15, because that would only be a raise of $5. The minimum bet in this situation would be a bet of $20, which is a raise of $10.

In the more likely case that the first raiser makes a somewhat larger bet, for example, a bet of $40 (which would be a raise of $30), the next player could fold, call the $40, or raise. If he raises, he would have to place at least $70 in the pot, because his raise would have to be at least as much as the previous raise. The only upper limit on the size of his raise is the number of chips he has in front of him when the hand begins.

Players may not buy additional chips in the middle of a hand, but can always (unless they have run into their daily, weekly, or monthly limit) decide to buy more chips in between hands.

If a player bets more chips than you have in front of you, you are not forced out of the hand. You are allowed to call for whatever number of chips you have. If no one else is in the pot, the bettor simply takes back his excess chips, and the hand is played to conclusion without any additional betting. If there are other players remaining in the pot, it is possible that a side pot may be created.

Side Pots
Side pots also happen frequently in limit poker, but because the bets are larger in No-Limit, the situation tends to occur a bit more frequently here. Let's look at an example involving three players, Eddie, Sarah, and Scott. When the hand starts, Eddie has $1,000 in chips, Sarah has $400, and Scott has $2,500. The blinds are $5-$10.

In the pre-flop betting, Eddie opens the hand for $50, and Sarah and Scott each call, with everyone else folding. This puts $165 in the main pot.

After the flop, Eddie decides to bet $500. Sarah only has $350 left, but she likes her hand, and decides to call all-in for his $350. If Scott folds, $150 would be returned to Eddie and the hand would be played out without any further betting, because Sarah has nothing left to bet.

If, on the other hand, Scott also likes his hand, he has two options. The first is to call Eddie's $500 bet. This would create a $300 side pot between Eddie and Scott only; Sarah is not eligible for it, even if it turns out she has the best hand of the three players. The main pot, for which Sarah is eligible, contains the $165 that went in before the flop, and $350 from each of the three players ($1,050), for a total of $1,215. Sarah is eligible to win this, as of course are also Eddie and Scott.

Scott might also decide that he REALLY likes his hand, and instead of merely calling the $500 bet, he wants to move all-in. Because the other player remaining in the hand (Eddie) has only $450 left in front of him, this is really tantamount to raising Eddie's bet $450. 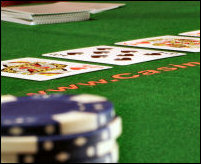 If Eddie decides to fold to Scott's raise, Scott and Sarah remain in the pot to contest the main pot of $1,215.

If Eddie decides to call Scott's all-in raise, we have two pots. The main pot is $1,215, and will be awarded to whichever of the three players holds the best hand. The side pot is $1,200. Even if Sarah has a royal flush, she cannot win this $1,200, because she did not invest any of her money in it; she invested only $400 in the hand. Whoever has the better hand between Eddie and Scott will win the side pot, and if it turns out that this hand is also better than Sarah's, it will win the main pot as well.

NOT A RECOMMENDED GAME FOR BEGINNERS
As you can see from the size of the potential raises, in No-Limit, all of your chips can be at risk on any one hand. While this creates the potential for huge wins, it also creates the potential for large losses. For this reason, we recommend that novice players start off with limit poker, and only move into No-Limit after they gain a significant amount of experience. No-Limit tournaments are also an excellent place to gain experience in No-Limit without risking huge sums.

This month our online casino of choice is:
Jackpot Party