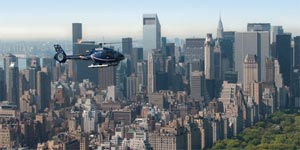 New York has many famous buildings and landmarks, but walking around such a busy city you'll probably miss many of them or find long queues to see the sights you want.  So why not treat yourself to the Big Apple Helicopter Tour of New York?

The tour lasts around fifteen minutes, which may not sound very long, but the agility of the helicopter along with its unrivalled access from the air, means that you'll get to see all of the attractions during that time.  You will be able to see some of the tallest buildings at their finest, rather than straining your neck trying to look up at them.  To top it off, you sit in your own private cocoon, without anyone trying to barge past you or ask you to move along.

You'll start at New York's Downtown Heliport, near the financial centre of Wall Street.  Your flight will take you past the World Financial Centre, the Art Deco grandeur that is the Chrysler Building and the iconic Empire State Building, although giant apes climbing up the side may not be available.

The Woolworth and Met Life Buildings are next on the agenda before your pilot heads over to Ellis Island so you can view what was for many, their first taste of America.  After this you'll face to face with the most famous symbol of America, The Statue of Liberty.

From here it's just a short flight across the Hudson River and over the George Washington Bridge, which has the largest vehicular capacity of any bridge in the world.  You will then take a flight over Central Park on your way back to the heliport.  That's a lot of sights in fifteen minutes, more than some people manage to see throughout their whole stay in the city!

Depending on time and weather conditions it may also be possible to fly past the South Street Seaport - a national historic area which has some of the oldest architecture in New York, The Brooklyn Bridge - which on it's opening in 1883 until 1903 was the longest bridge in the world, and USS Intrepid - a World War II aircraft carrier which also saw action in Vietnam and was the recovery ship for the Mercury and Gemini space missions.

All of the seats on the helicopter will offer you an unrivalled view of the sights of this magnificent city.  As you sit gazing across the New York Skyline, your pilot will provide you with commentary of the city through your headphones.  Feel free to ask any questions about the 'Big Apple', your pilot will be happy to assist where they can.

The Big Apple Helicopter Tour is one of the most exhilarating, memorising and incredible helicopter rides you can go on.  Once upon a time these views were reserved for the rich or for movies, but for around $150 you too can share the experience.  The tour may be relatively short, but the memories will last a lifetime.

Casino of the Month
This month our online casino of choice is:
Sloto'Cash Casino