full reviews »
Casino of The Month
This month our online casino of choice is:
Aspinalls Online Casino

History of Mah Jong before 1920

Tile games of some form have been found from around 1120 AD in China and Chinese dominoes has been played for centuries in that region. Mah Jong, however, bears a much greater resemblance in play to certain card games, namely those of the Rummy family. Prior to the appearance of Mah Jong, a variety of card games were played in China with at least four types of cards decks. However, just like Mah Jong the majority were of the set-collecting variety and certain terms from these old card games are also used in Mah Jong. So, it seems not unreasonable to place Mah Jong as a nephew of those card games.

The conception event that mated the card collection methodology with the tile pieces is usually touted as a missing link and it certainly appears possible that Mah Jong may have been the result of such a unique event although it's just as likely that nothing so straightforward ever occurred. Here are four theories for contemplation: 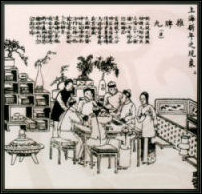 There is good evidence from Chinese researchers that Mah Jong originated in the provinces of Kiangsu, Anhwei and Chekiang near Shanghai because no records of Mah Jong are found in any other part of China before 1900. Beyond that, one theory from Canton states that the inventor was Hung Hsiu-Ch'uan, the Cantonese who led a rebellion and proclaimed himself Emperor of Nanking. It's certainly feasible that the game appeared in his court which was famous for it's hedonistic pursuit of pleasure and entertainment.

A rival theory believes that the inventor was an inhabitant of Ningpo in Chekiang which is famous for it's ivory carving. It is believably claimed that playing cards used for an earlier game were for the first time recreated as ivory tablets here.

A third, credits a pair of brothers in Ningpo with the act of transposing playing cards used for the game of Ma-Tiao onto ivory and bamboo about 1870 or 1880 and advances that a magistrate of Chekiang province became an enthusiast who promoted the game and made it popular throughout Chekiang. A quite detailed account of this was given by one T. E. Pun and there is no doubt that Ma-Tiao is similar enough to Mah Jong to be reasonably certain that it is, indeed, its direct ancestor.

More cynical authors note that the Chinese term for card, "P'ai", actually simply means "playing rectangle" and the same word is used for such objects whether they be made of paper, card, bamboo, bone, ivory or any other solid material. Evidence shows that many P'ai games recorded through history had always been played on both tiles and cards interchangeably. This certainly spoils a good story but it is just as likely that no "invention" ever really took place and that a much more blurred development is the fact of the matter.

Regardless, the game that sprang from this area of China, almost certainly a descendant of the card game Ma-Tiao, was initially somewhat rough around the edges. In 1905, Mah Jong was not really known outside its original area but over the next 15 years it spread incredibly quickly across most of China and in doing so supplanted Chess as the most popular Chinese game. The Chinese gradually removed the inelegant elements of game play and incorporated a bevy of rituals surrounding the method of play that have now become enshrined in stone. Most of these rituals occur at the start of the game and are to do with the shuffling, the building of the four walls in a square, the deal and the splitting of the wall to form the "Kong box". To a beginner, they seem mystifying and unnecessary but the truth is that Mah Jong is, by origin, a gambling game and most of these elements prevent cheating very effectively, a factor that is important when the stakes are high.....

These gradual improvements that nominally were concluded between 1910 and 1920, produced a game of mathematical beauty as well as being physically aesthetic. Certain authors wax lyrical for a great many pages about the mystic and harmonious background to this process and the result. Suffice to say that numerous aficionados of the game regard the variety of Mah Jong of 1920 as the "perfect" Mah Jong and look upon all future modifications and evolutions with great disdain. In fact, at this time, the Chinese played a ream of variations in rules and procedures according to the locale and the seriousness of the game, and so there was nothing clear-cut about the Chinese game of the 1920s which was as unregulated then as it is now. However, the game had come about with a natural regard for playability and elegance

This month our online casino of choice is:
Aspinalls Online Casino