full reviews »
Casino of The Month
This month our online casino of choice is:
Bet365 Casino

The game of roulette has fascinated casino patrons for close to 300 years now. Although no one seems to know all of the details surrounding its origination and development, some form of the game is probably as old as the "wheel" itself. There are accounts of ancient Romans tipping their chariots on their sides and spinning one of the wheels for games of amusement. The word roulette itself is French, meaning "little wheel." Several early versions of roulette appeared in Europe during the 17th and 18th centuries. It is believed that the noted French scientist and mathematician, Blaise Pascal, invented the mechanism in 1657 while experimenting with perpetual motion devices. Pascal, incidentally, pioneered the mathematical field of "probability."

The first account we have of a spinning ball and rotating horizontal wheel being used as a gaming device was in a game called "roly-poly," in 1720. The Gaming Acts of 1739 and 1740 banned roly-poly, as well as many other games of chance, in England.

An innovative Beau Nash, the Master of Ceremonies at Bath, England, evaded these laws by introducing "EO." EO, or even-odd, was a simplified version of the game, but that too was outlawed in 1745. During the next 50 years, the game evolved into the one we would recognise today. These modern wheels appeared in Paris casinos around 1796. They contained all of the familiar elements that survive today; the alternating red and black colours, the layout of numbered pockets 1 through 36, the 0 and the 00. About the only difference being that the single zero was red in color (although the casino barred any "red" bets from winning if 0 appeared) and the double zero was black (again barring "black" bets). To alleviate the confusion, the color "green" was eventually assigned to the zeros.

This version of roulette found its way over to the U.S. by way of Europeans in New Orleans in the early 1800's. Some proprietors, not content with a big 5.26% edge, experimented with wheels containing 31 pockets. These wheels were numbered 1 through 28, with a 0, 00 and an "Eagle" pocket. These greedy proprietors paid out only 26 to 1 for a single number win (30 to 1 is the fair pay out). This translates into a whooping 12.90% house edge! People soon stopped playing these wheels in favour of the original double zero wheels.

Meanwhile, back on the "continent," two innovative brothers from France, went in the opposite direction. Francois and Louis Blanc introduced the first single zero roulette wheel in 1842. They left France, where gambling was illegal, and set up a house in Homburg, Bavaria (now Germany). The new single zero wheel, with a 2.70% edge instead of the double zero's 5.26% edge, was an instant hit. It decimated the competition. When gambling was outlawed in Germany, Louis Blanc (who survived his brother) accepted an invitation from the Prince of Monaco, Charles III, for whom Monte Carlo was named. For a cost of 2 Million Francs, he was allowed to establish and operate the magnificent casino that sets all the standards in Europe. 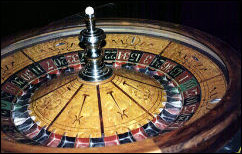 In Europe, the option of "En Prison" was offered, further lowering the house edge, on even money wagers, down to 1.35%! No wonder the game accounts for over 50% of revenues in European casinos as compared to about 5% in U.S. casinos. Casinos today in Atlantic City, do offer En Prison for even money bets on their double zero wheels. This effectively reduces the casinos' edge from 5.26% to 2.63% for those bets.

Roulette did enjoy popularity stateside around the turn of the century up until World War II. As Americans learned to lose less at craps and subsequently became interested in the notion that black jack was beatable, roulette declined in popularity. Roulette is the oldest casino game still in existence. It is possible that with the emergence of more single zero wheels in the United States, and a well informed gambling public, the game may enjoy a resurgence in popularity.

This month our online casino of choice is:
Bet365 Casino