Absinthe, the show of intoxicating circus and burlesque 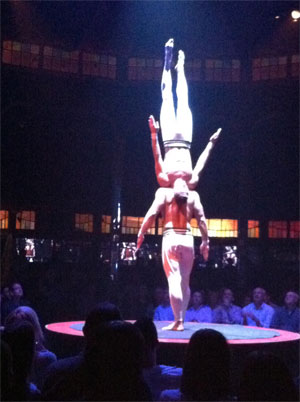 Caesars Palace is the venue of one of the most extraordinary shows to hit Las Vegas and the show is the amazing Absinthe. This incredible mixture of circus and burlesque is the brain storm of Spiegleworld and BASE International who have come up with a show that offers audiences the old world burlesque, carnival and pure decadence in a performance that will leave them speechless.

The Roman Plaza at the front of Caesars Palace has been transformed into a playground filled with extraordinarily entrancing entertainment. This unique show comes alive as the sun goes down and provides a pure fantasy world for all those who enter into it. There is so much to get involved with as the spectators wonder through a maze of 20th century European décor that captivates the imagination in so many different ways and leads them to the centre piece of the show.

The main attraction takes place in a central wooden tent that is generously decorated with flamboyant mirrors, colorful stained glass windows and opulent velvet drapes. This European feel of decadence is just the beginning of some of the most outlandish acts that unfold in the round theatre. This adult show is a surreal experience for all who take part in the excesses that the cast perform just a few feet away from them in breathtaking acts that will enthrall them.

The show is just filled raw energy, talent and sensuality that captivates, amazes and inspires the intimate audiences. The performers come from all around the world and they provide a show that has never been seen before on the strip in Las Vegas. It is such an exciting and dazzling performance that it has got the whole of the town talking just as Absinthe did when it was performed in New York City and Miami where it took both towns by storm.

The shows ringleader is The Gazillionaire who temptingly invites an audience of 600 people into a decadent world of incredible performances. He leads them down through a cast of fabulous characters who he informs them are the most beautiful men and women in the world and that he has bought these performers at vast expense to Las Vegas just to entertain them during the 90 minutes of spectacular performances.

The amazing stunts that are performed leave the audiences with an experience that will stay with them for the rest of their lives. It is a pure mixture of ‘Cirque du soleilâ and the ‘Rocky Horror Showâ that enthralls everyone who witnesses the graceful yet gravity defying stunts that are performed so close to the audiences that it is almost tangible.

Caesars Palace has always bought some of the best shows to town and Absinthe is no exception with the first class entertainment that it has achieved and Bonnie Gilmour, the vice president of marketing for Caesars Entertainment in Las Vegas knows that this show will have its audiences mesmerized from the very start to the very end of each performance adding another dimension to the world of Las Vegas.